Which M.2 Adapter is needed in the EON

After inspecting my unit I found that I need to get an adapter in order to use an M.2 SATA SSD. Can anyone point to the correct adapter on Amazon to get?

This one works for me.

Fits OK on my system. The M.2 adapter just has to be one of the circuit board types that is about as wide as the M.2 drive (i.e. not in any kind of case). [ssd_view]

Anything of a similar size should be OK.

I got the NVMe-only version of this one, it’s working alright: 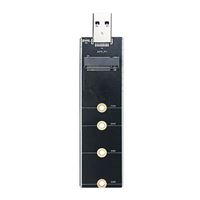 Got up to 400MB/s cloning the OS image onto it from my computer. Put just the blue thermal pad on the outside of the SSD stick so it touches the EON case when installed to dissipate heat.

I bought this one to use an NVME drive to boot from.

It’s working great, although my laptop was not able to write the Bullseye image to it using Raspberry Pi imager.
I needed to use a different adapter to get the image written to the 500GB WD Black NVME SSD.

Damn, too late for me, I bought same of BlackRose67, except its firstname is Lazmin … By the way thanks for feedback.
It will be there tomorrow.
I see this sentence in article product :

Because your computer won’t recognize the brand of SSD through this NVMe adapter, you can’t use Samsung Disk Cloning software for Samsung SSD

Maybe this is sort of same problem for RaspberryPi Imager. Was your the last one version (imager_1.6.2.exe, I think) ?
Problem is I havn’t another adapter.
I will try with Balena Etcher with Win10, and also not from computer but from pi …
Will try to edit my results here.

All it showed for me was a 500GB JMICRON device for the adapter above.

Never thought to try it from my pi running a desktop.
Probably would work considering it’s working very well in the EON.

When you use an adapter the system sees the adapter information and not the drive’s. So if a Samsung utility is looking for a Samsung drive it cannot see it. When I flash to my 500GB M.2 drive on Linux it appears as a 500GB “JMicron Tech” disk. I think Windows 11 identifies it as a 500GB “JMicron SCSI” drive.

With regards to image writing software…

If you are on Linux the Gnome Disk Utility is a useful tool. It comes pre-installed on many distros. It does not seem to have much in the way of dependencies so it installs on many other desktop environments. I installed it on Kubuntu (KDE) just using sudo apt install gnome-disk-utility.

The good thing about it is you can also create an image from a drive (like Windows users can with Win32DiskImager). Great for staged MicroSD card backups as you gradually add and configure additional software on your server (you can also image larger disks but it will take a long time). If the complicated install of some software goes badly, just write your custom image back to the SD card and you are ready to try again in a couple of minutes.

It’s also worth looking at PiShrink. Run this over a RasPi OS disk image you have made and for a new install (without lots of user data) it will shrink a large image down, or make a shrunk copy, that is just couple of GB. This makes it much quicker to write to a card. Also, by default, it expands the file system on first boot to fill whatever card / drive it is now on.

So you can install the system as much as you can using an SD card, backing as needed up along the way. When satisfied you can image it, pishrink it, and then write it to the SSD. Upon first boot the system expands the file system to fill the SSD and reboots into a system that uses all the SSD.

Sorry for the long post. Just thought I’d also share a couple of things I have discovered that can make installing complicated software onto a Pi a little easier if things go wrong.