How many of you will use the new 64 bit OS with your EON or will you stay with the 32 bit. Can anyone provide the pro & con of using the 64 bit, thanks

I think I’ll will change to the 64bit version.

64bit is faster than 32bit but uses more memory.

I’m using the 64-bit lite version with my install on a pi4 8GB device.

Is OMV6 officially out or is it still in Alpha

I will be switching over to the 64bis OS, as I have an application I am working on that requires a larger than 4gig memory footprint.

Two main reasons to switch to the 64bit OS:

As mentioned by @linux203, watch the geerlingguy video, he does a good job explaining

There have been regular updates to it, with the most recent being January 28, 2022.

Based on the OMV Website version 6.0 is still in development 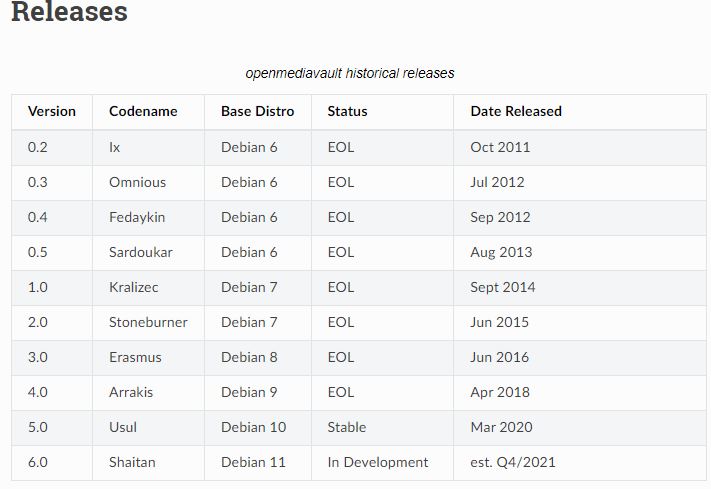 Just done that. I’m still testing the Open Media Vault (Migrating from a Synology and wanting all the same features I had - dlna and torrents) and since I have nothing there yet, I can try . I’ve just installed the 64bit version on a NVMe disk and will boot after writing this sentence ! Let’s see if it works fine

The installation script from the ArgonNeon installs version 6.0.10-1

Great thanks for the Info, let us know how it works

I created an image of the OS, installed connected to it remotely (as it’s in the basement, and cold…),
no problem. However when I went to look at the attached monitor, NO video.

Booted it, I get video, system comes up and switches to graphics mode and nothing.

I then did an update (noticed a number of updates, mostily video…) rebooted and … I have video.

Moral of the story:

Figured I would post just incase anyone else is seeing this. FYI I had this happen to an 8gig PI in the EON enclosure and another one outside of the enclosure so it’s not the Argon EON.

Ive been on 64bit since my Eon arrived a few weeks ago. Runs great and opens the door to far better alternatives to OMV

What alternative to OMV are you running on your EON?

NextCloud and Owncloud are 2 that I’ve used. Both more than capable if not more-so

I’m prettty sure that the version of OMV that the install script builds depends only on the version of the OS you are running, i.e. for Buster you get OMV5 and for Bullseye you get OMV6. Whether it’s 32 or 64 bit is irrelevant.
Going back to the original question, I am running the 64 bit version of Pi OS Lite because the installation of OMV is more reliable on 64 bit than 32 bit.

Going back to the original question, I am running the 64 bit version of Pi OS Lite because the installation of OMV is more reliable on 64 bit than 32 bit.

OK, I didn’t know that. Is there a way to start all over again and somehow “import” my drive configuration (including my shared folders)? Or do I have to make a backup of my data and redo everything?

If you have installed OMV and all the plugins you need without a problem, then there’s no need to change. I had problems installing some of the plugins on OMV6 under 32 bit PiOS, that didn’t occur on the 64 bit version.
As for importing your existing configuration into a new OMV build, I haven’t tried it, but it may be possible. You can certainly mount the existing file systems on your shared data drives onto the new build. You may need to redefine the shared folders so that OMV knows about them though.
I guess you could also try copying your existing file /etc/openmediavault/config.xml across to the new build and see if that works?

I’m using Bullseye 32bit and installed omv. Just checked the version installed, I have 6.0.10-1 installed. A little confused on what you stated.

I was under the impression that it was 32-bit vs 64-bit that determined which OMV you got.

Turned out to be Buster vs Bullseye