ghalfacree’s post the other day on hard drive temperature fan control renewed my interest in cooling after reading the Fan Airflow Direction thread.

I have an Argon ONE V2 which is always warm to the touch, using the default Argon fan script the fan has only activated on the hottest days in summer.

The fan on the Argon EON has only activated prior to the Argon script being installed, the fan has been flipped so that it pushes air up and out of the case. Prior to this weekend the highest temperature I have seen was 42C (this was casual observation rather than logging).

I have run 30 minute and 60 minute Stressberry sessions with very similar results. Ambient temperature was around 20C during each session and hard disk activity was low on each occasion, recorded Stressberry temperature did not exceed 52C.
To the touch the base of the EON became warm on each occasion (but not as warm as the ONE), the back panel of the case was warmer than the front pillar, more so on the right where I have the boot/OS SSD mounted in the USB3 slot.

Attached are the two Stressberry graphs from this weekend. 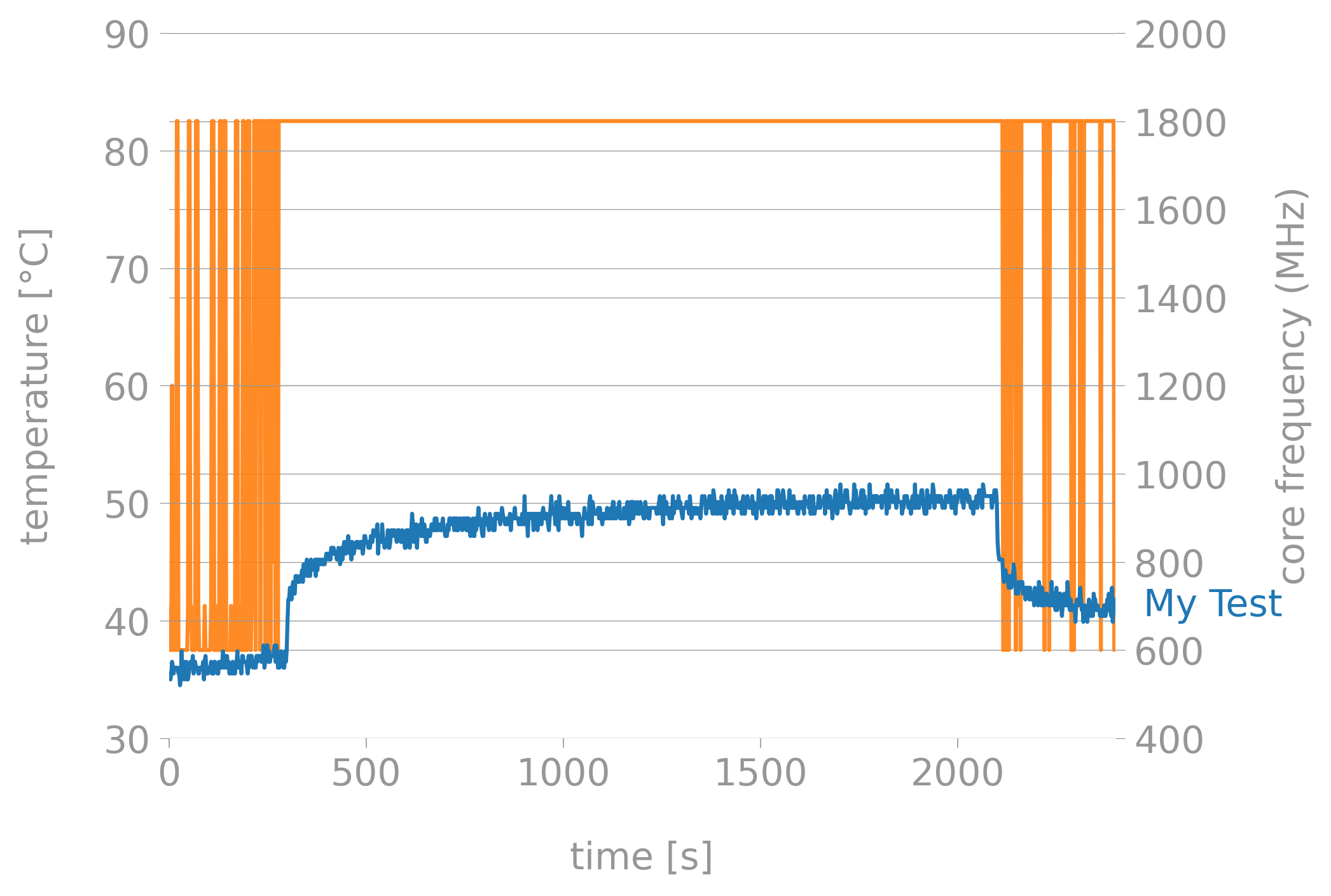 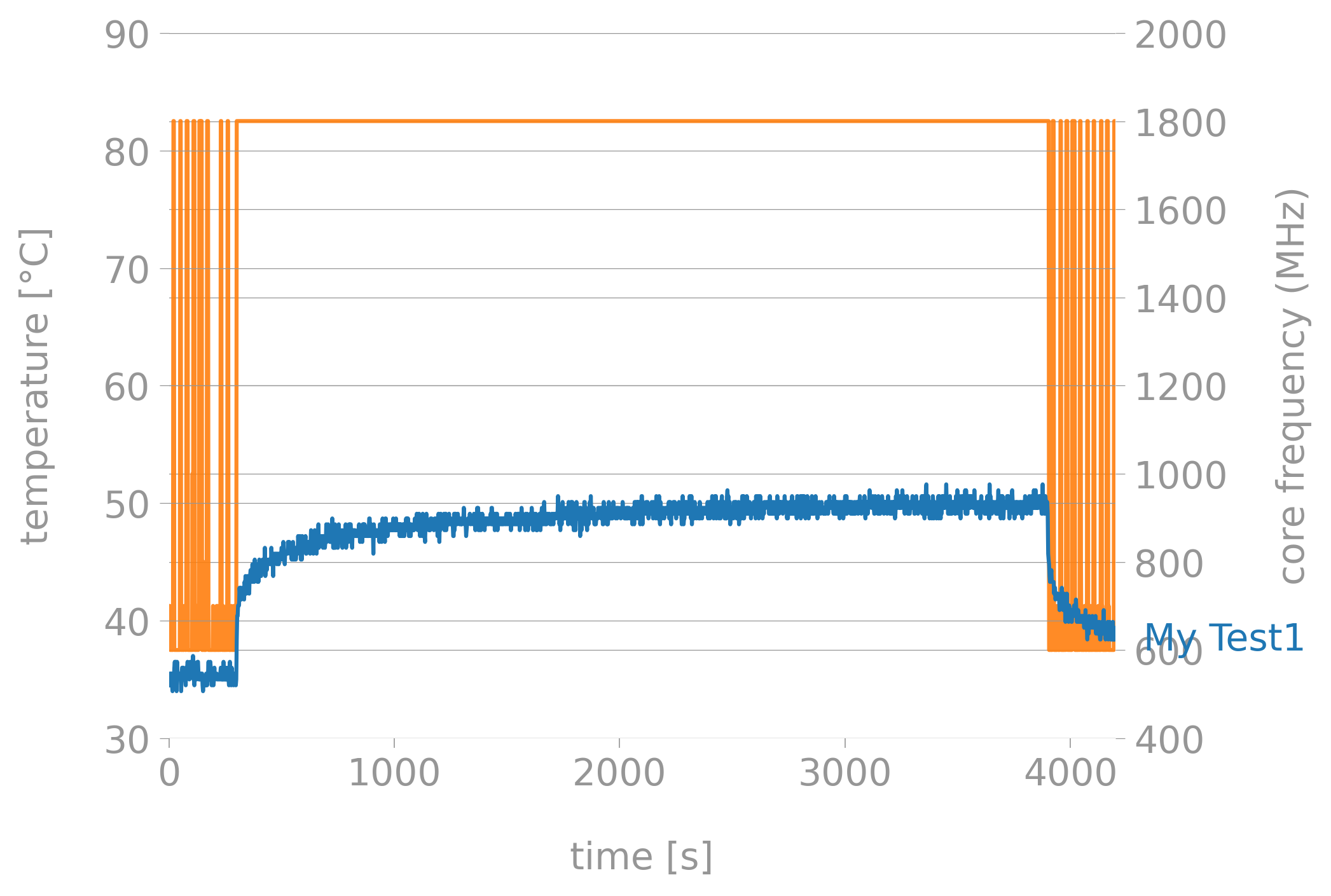 Nice. Always like more data.
Are these temps CPU temps or disk temps? Do you have 3.5" drives? 1 or 2? Just trying to get some more context.

Dunno about CM9, but I’m running with two NAS-grade 3.5" drives and an M.2 SATA SSD, in the internal USB port, installed - and I can’t say I’m thrilled with the temperatures I’m seeing.

Let me whip up a quick graph… 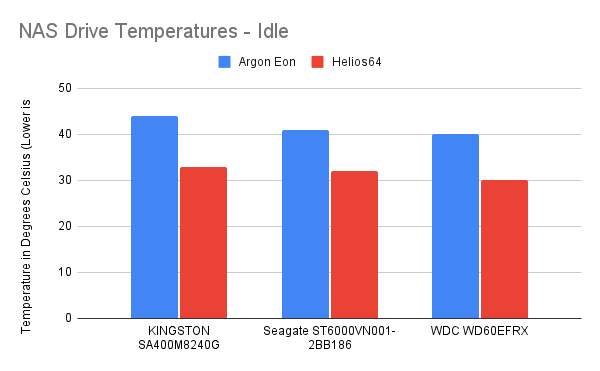 That’s a Kingston 240GB M.2 SSD, a Seagate IronWolf 6TB, and a Western Digital Red Plus 6TB. The blue bars are the drives at idle, installed in the Argon Eon; the red bars are the same models of drive installed in a Helios64. All measurements taken at an ambient temperature of 20.4°C, all at idle, all after allowing both devices to run themselves up to operating temperature.

The Eon is a full 10°C hotter across the board, on all drives. That’s only going to get worse when summer hits and the office heats up, too.

Running the Eon’s fan at full speed is unbearably noisy, and even then fails to get the temperatures down as low as the Helios64.

Personally, I’d say that the Eon’s support for 3.5" drives is paper-only; unless you’re installing the thing in a fridge, stick with 2.5" drives so everything has room to breathe.

I’ll tell you what, there’s a real missed opportunity here: forget messing with whether the internal fan’s sucking or blowing, because to be honest it sucks in either orientation.

I’ve a 120mm USB-powered fan with manual speed control here. Set to its lowest speed, which is almost completely inaudible, and pointed at the rear of the Eon: 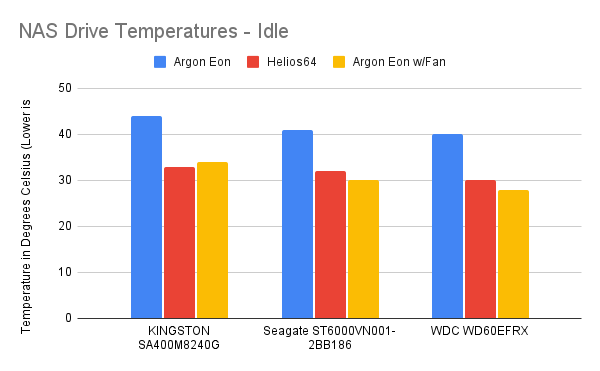 Absolutely massive drop in hard drive temperatures - and the Raspberry Pi itself is idling at under 30°C, according to the OLED panel. If only Argon had put a better fan in place!

Thank you very much for sharing your indepth test results.
I am hoping to ask a couple questions here to get some more insight from whoever could elaborate, as I am pretty much a novice on this type of thing.

I put 2 4TB WD Red Plus drives in my NEO, and WD’s data sheet for this product says the operating temp is 0 - 65°C. Is it still not good for them to be operating above 50°C?

In my specific personal case, these drives will primarily be used as a simple Home NAS to store photos, documents, and music files with one drive being an rsync clone of the other. The most intensive use period for these drives would be when copying a new batch of photos or music files, or perhaps when performing a somewhat larger rsync operation. Should I be concerned about the temperature in my case, since I have 2 3.5" drives in mine? I also have one additional 2.5" HDD drive running my Plex music server, but figured that would not be a huge factor in temp management.

I put 2 4TB WD Red Plus drives in my NEO, and WD’s data sheet for this product says the operating temp is 0 - 65°C. Is it still not good for them to be operating above 50°C?

Personally, and speaking as a former sysadmin, I get uncomfortable when drives run above 45°C - studies have shown that going above that (or below 25°C) has a measurable impact on lifespan, particularly once the drives hit about two years of age.

Should I be concerned about the temperature in my case, since I have 2 3.5" drives in mine?

Again, speaking personally, yes. I’m not going to use the Eon until I’ve figured out a solution to the problem - which will probably involve finding a way to mount a USB-powered fan to the rear of the case.

@ghalfacree Is that fan just blowing on the back? i.e. no extra ventilation added, or sides off? I may just do exactly the same thing.

Looking at the back of the case, I think a bracket could be made that uses the “extra” holes for screws not currently being used, something 3d printed maybe?

Anyway I agree the internal fan just will not cut it, as there is insufficient clearance for any real air flow. I had considered milling the top out in a circle leaving the mount points. But if I can add a fan just blowing on the backside… that seems like a much better approach.

Also considered milling out the low spots between the ridges on the backside of the cooler… But I just don’t really want to mess up something I can’t replace. unless I can purchase the part… lol.

@ghalfacree Is that fan just blowing on the back? i.e. no extra ventilation added, or sides off? I may just do exactly the same thing.

Yup, literally just balanced on the Ethernet and its own USB plug and leaning against the back at a jaunty angle, running at the slowest speed its controller allows. 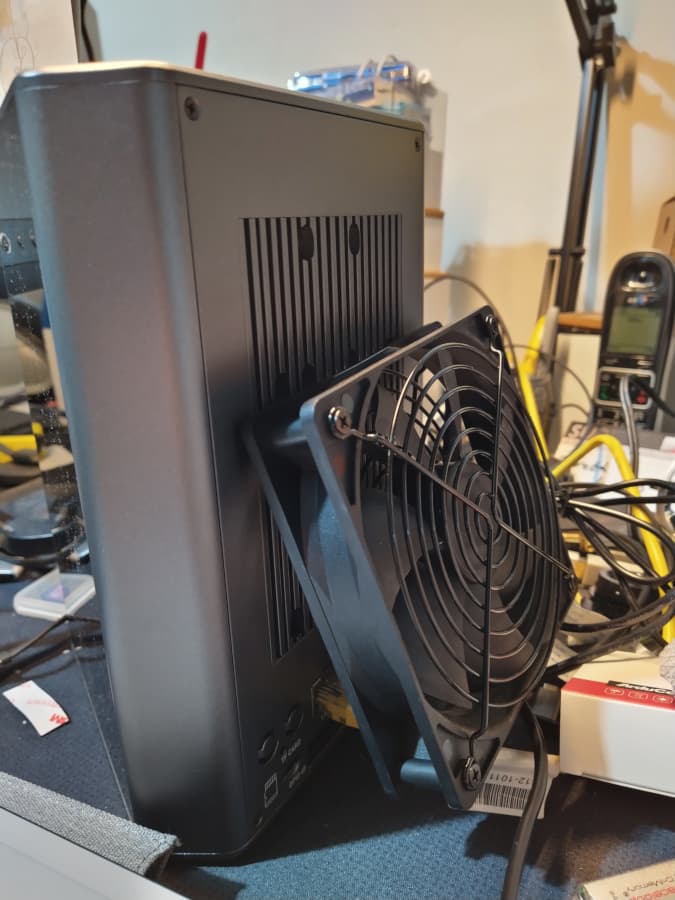 Looking at the back of the case, I think a bracket could be made that uses the “extra” holes for screws not currently being used, something 3d printed maybe?

I was thinking exactly the same thing, but sadly I lack the skill. If someone wants to design a mount for a 120mm fan, though, I’d be most appreciative!

Just throwing my 2 cents in… got a Raspberry Pi 4 8Gb running Ubuntu 21.10 with Cinnamon DT Environment/ std Raspberry PSU, Kingston A400 120Gb Sata connected… was concerned regarding operating temperature: no case/ Argon M2 with SSD Base, fan on, fan off…all in high 30ś and 40ś. That is until I totally removed the GPIO magnetic cover. I left that cover off overnight with the fan on 100% of the time. The internal chip temperature is now 28 degrees Centigrade, computer has been playing music and idling, but always on. That is the way it will stay now. (Earlier experiments failed to indicate direction of airflow, but removing the cover of GPIO pins made a huge difference) I used a BIC lighter to try to find a draught . Hope that this assists…

Well, it ain’t pretty, but… 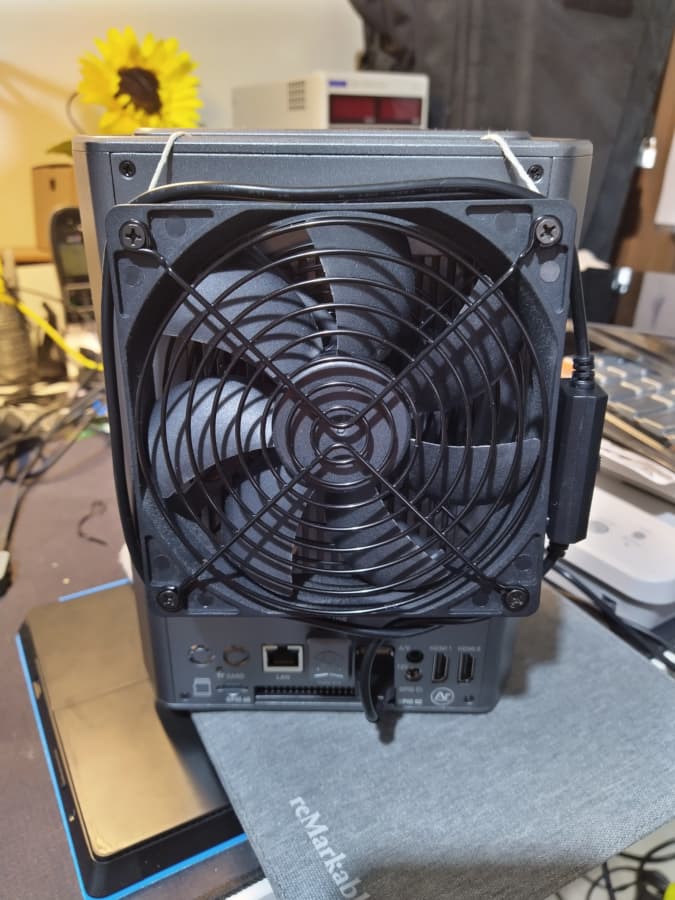 Bit of string knotted and threaded through the top vent. Holds the fan at an angle, but does hold it!

Invisible from the front, too, as all good cheap-and-nasty hacks should be.

I was able to use the S.M.A.R.T. functions in OMV to check my disk temps and my two WD Red Plus drives were 39/40 every time I checked them, but my 2.5" 2TB WD drive was 43-45.
Based on your tests showing how effective another fan can be, I ordered a 120mm fan and should be getting it this week. I am not sure if I will try to mount it or just stand it up behind the EON, but seeing your hack here at least lets me know there ARE solutions here.

Would be interesting to see if anyone from the Argon team has any thoughts on this matter.

Fans operate much more efficiently if they are at least the “hub” width away from and obstruction, or grate. looks like about 20-30mm given your fan…

The fan is on the mid setting, but I may drop it to low and see if there’s much difference. It is not quite Spring here yet, so we will have to see how it manages once things warm up in Spring and Summer.

First we would like to acknowledge the support and feedback of @NHHiker and @ghalfacree, which was very helpful as we continually improve on the Argon EON. Your input to this Forum is well appreciated by Argon40 and I am sure the community at large.

Regarding the Hard Disk Temperature, we did some tests and with the Raspberry Pi 4 in IDLE the CPU temp remains at 50C or below (even at our 30C ambient temp) and the mechanical drives were running between 40C-45C. At these temp ranges most manufacturers would rate their HDDs to work safely.

In light of the discussion in this FORUM we made the following changes:

(1) FAN Direction - Based on more recent test it is better for the FAN to blow outwards/upwards. Thus we recommend that Kickstarter Backers flip the FAN. Future buyers will receive their units blowing outwards.

(2) Argon Config - We have added a sub-menu for Users to SET the FAN Triggers based both on the HDD and CPU temperature. Thank you for suggesting this @ghalfacree .

We do not expect the EON case to cool the HDDs down to 30C as the EON’s cooling works like a system, wherein the RPI CPU temp will always factor in terms also in cooling the HDDs. But with ambient temperatures in the 25C or below we still expect the EON to run the HDDs in the low 40C and the RPI below 50C, which would not affect its long term performance of the attached devices.