Normal setup with or without SD card

Hi,
What setup is common for the Argon. As all know SD cards are not the 24/7 medium. So is it possible to run the underlaying system from an HDD, attached via usb?

Yes its possible to Boot Front USB (the m.2 case from Argon works the same way) 5 seconds in Google gave me this.

So is it possible to run the underlaying system from an HDD, attached via usb?

Yes, that is why the EON has an internal USB port, so the Pi4 in the EON can be booted from a drive plugged into it.

However the default is “Boot from SD Card if available, otherwise boot from USB” so it’s possible you won’t have to change anything. Just write the OS image to a USB drive, remove any SD card, plug in the USB drive, and boot.

Is a usb3 usb drive better than the SD card though?

Maybe using a SSH, would it be possible to get a 2.5" SSD plugged to the board and boot from it otherwise?

sure thats possible. Look at the Argon One m.2.

It got a Board at the bottom where you can add a SATA m.2 drive and then connect it via USB to the Raspberry. I configured my Raspberry to boot from this drive and it works like a charm for months now.

Yes but no such connector on the Eon as long as I can see. It is a pitty to have 4 sata and not being able to use one of them for booting >.<

usb drive it will be a suppose then

In the Campaign on kickstarter they showed such a connector. 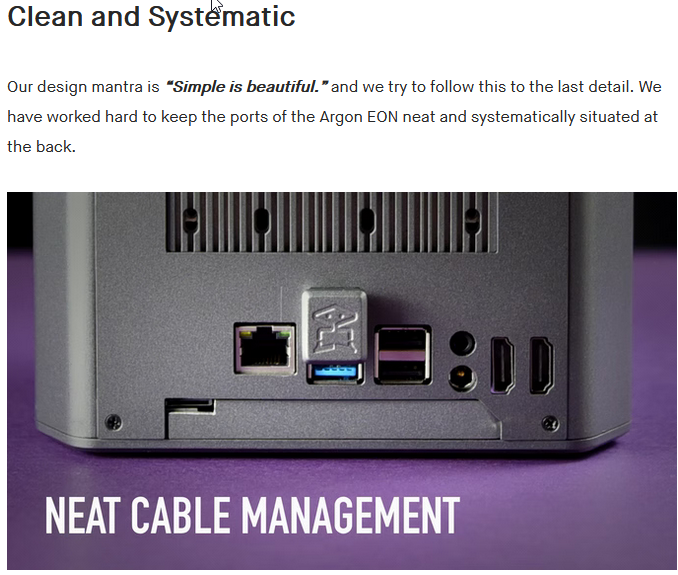 There is a USB Type A port inside the case for using stick type SATA or NVME M.2 SSDs to boot from.

You could even use that for booting off something like the Samsung Bar USB stick if you wanted.

So if I wanted to switch from a running argon M.2 installation (including a M.2 SSD as boot partition) to the EOS, all it takes would be the initial boot into an attached M.2-USB casing that contains the SSD from the M.2 case, stuck into the internal USB-A slot?
Then, uninstall argon m.2 script, install eon script and that would, under best circumstances, be all?

As the M.2-to-USB enclosure acted as a fifth drive in the case one had four SATA drives attached, how does the EOS go about even more USB sticks and drives attached to the back USB ports? If I count correctly, there are three more accessible, though I am not too sure about the one beneath the coupling USB bridge to the SATA-PCB. I am able to use that with a tiny USB stick dongle on the m.2 right now-if the dimensions don’t interfere we’re talking potentially eight drives: four SATA, four USB devices. (plus: SD card?)
I realize, power is a main issue here, I have plenty of 12V 5A power supplies here. But anyone able to share their experience with maxing out the drives?

would you rather use an old 8GB rpi4 or a new 2Gb one with the latest cores to run it as a NAS? Anyone knows of an overclocking report that shows side by side comparisons of the two CPU cores?

I currently have 8-RPi4B-4GB & 1-8GB units, everyone of them use an SSD or HDD (256GB to 1 TB) to boot from. I don’t like SD cards, but for the EON I’ll probably use one. To use a SSD or HDD to boot from ensure you have the latest EEPROM loaded on the Pi. If you reference RPi Imager ver. 1.6.2. Under Operating System select Misc Utlity images. There is only 1 Bootloader, click on it and choose USB Boot. Then Insert the SD card into the Pi you’re using, power on wait a few seconds. Power Off. Should be done.

Using the imager, copy whatever operating system you want to the SSD or HDD. When Done connect to the PI (ensure the SD reader is empty) power up. The first time it boots, it will take a little longer to boot up, it’s performing house keeping tasks. But after the initial boot it’s faster.

I am using an old 40gbyte Intel SSD in the Right Hand position to boot from. I haven’t had any problems with it. I just used a USB to SATA cable and RPI Imager on another Linux computer to make a boot drive from the buster lite ISO.

I had to do this because I could not get the SD Card reader on the back of the unit to function. I could boot from the SD Card while on the RPI proper, but it wouldn’t work with the White/Black ribbon and the back slot.

Also, while the OLED lights up with the log, it won’t display any info, even after configuring with the Argon-Config program. Beginning to think there may be a quality control issue with the daughter board.

Hi Frenezia
I came across your post regarding the internal USB port and you may have answered my query.
I was wondering if a ssd could be used as storage only, instead of booting from ??